Ideas for Decorating Above Cabinets

10 Aug Ideas for Decorating Above Cabinets

Posted at 13:18h in finishing touches by between3sisters
0 Likes

As the kitchen remodel comes to a close, decorating ideas start flowing through my mind. Most importantly, how to decorate above the cabinets. I have expressed before in other blogs how decorating really weighs on my mind. You would think a person such as me who works in a creative job that this talent would come easily, but for some reason I tend to over think it. Also, the fact I am a super cheap person doesn’t seem to help.

Originally, when we started this kitchen remodel, I wanted it to be a wine theme. Well, after the paint colors and backsplash tile was picked out I just didn’t know how well of a wine theme would work with our kitchen. Our kitchen is painted blue, the counters are pretty cream, and most wine decorating items are red. I was afraid it would look like a red, white, and blue kitchen gone awry.

I decided to compile some pictures for decorating above the cabinets. There are many pictures out there of what others have done, and it really helped me decide on things I like and things I don’t like. 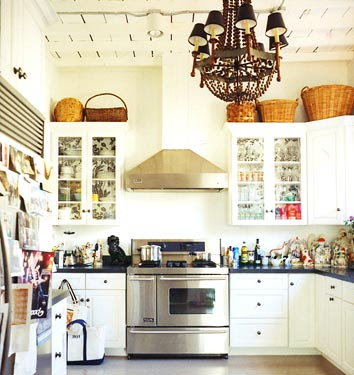 Like: I love the baskets! I think the way they varied the size and color of each it creates such a nice placement of the objects! Also, everyone can use more storage space! Too bad my cupboard space is limited to 12″

Like: This is probably my favorite of all of them. I just love how all the items coordinate so well with the theme of fishing. I think when you use a common color, theme, or subject it just groups everything together and makes it look so much more polished. 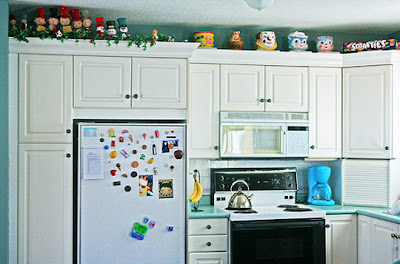 Don’t Like: I could see it now…there I am, waking up at 3am for my midnight snack (you get hungry a lot when you are prego) I flip on the lights and AHHHHHH!!!! millions of little eyes staring at me. Some of you may find this cute, but I think clowns and dolls should be left to the kids room. 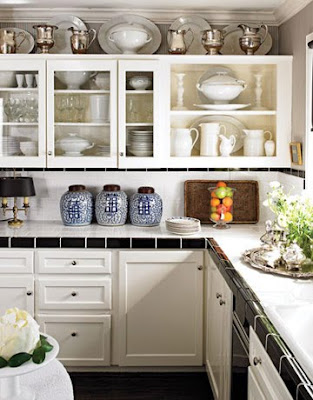 Like: The homeowner did a great job in creating a white backdrop of plates to tie in the main color of the kitchen, but then used a color that was not in the current kitchen to create some contrast. Using the silver to draw your eye upward makes this above cupboard decorating a success. 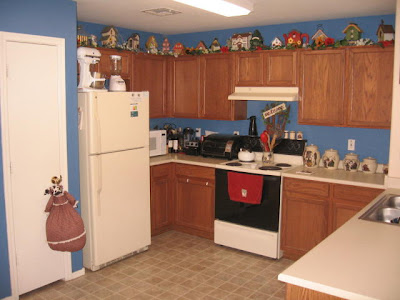 Don’t Like: This was actually on a website called ugly kitchen or something like that. I do like themes in kitchens, but it gets to the point where there is so much of one theme it looks like junk is just thrown together. A few of these bird houses would have made it look more organized then the… I don’t know…fifty they have up there. 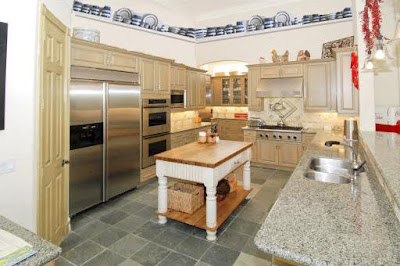 Don’t Like: Ok, we have to be practical when choosing items to put above the cupboards. Could you imagine getting up there to dust all of these dishes?? I mean, they wouldn’t have to be dust free all the time, but the few times a year when you tried to dust them would be a nightmare! Also, for some reason, the blue just doesn’t seem to go with this kitchen. It almost looks too forced of a decoration, if that makes sense. 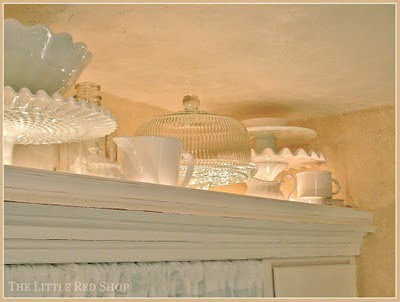 Like: Yes, I know I already said too much clutter is a bad thing. I do hate dusting. The reason I like this one is because of the back light effects. I really like how the dishes glow with the above cabinet lighting. Also, being that they are mainly white or clear I do not think they would show much dust. 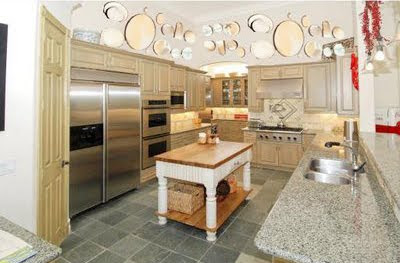 Don’t Like: It’s funny because I ran across this photo and one in the previous on two different websites and I don’t like either. They are the same kitchen with what appears to be photoshopped elements above the cupboard. I actually love the kitchen, but the mirrors in this one just look out of place. I feel like they are trying to mix the modern with a obvious traditional kitchen. Also, I have always been a fan of white space. A crowded design, or in this case decoration, is never good. The eyes tend to shy away from overflowing and overdone designs. Leaving areas for your eyes to take a break will make your decoration seem more deliberate and well thought out than overdone.

Like: I like this one for the simplicity and the fact the owner chose little plants as opposed to vines. Almost every picture I came across for above cupboard decorating has vines in it. I mean, I like the vines, but it’s nice to see something a little different then the standard ivy.

Well, those are just some of the above counter decorating that I have found online. If you have any you would like to suggest I would love to hear from you. The more ideas the better!

UPDATE: Please read my follow up blog on decorating above the cabinets.