9 Tested Appetizers For Your Party 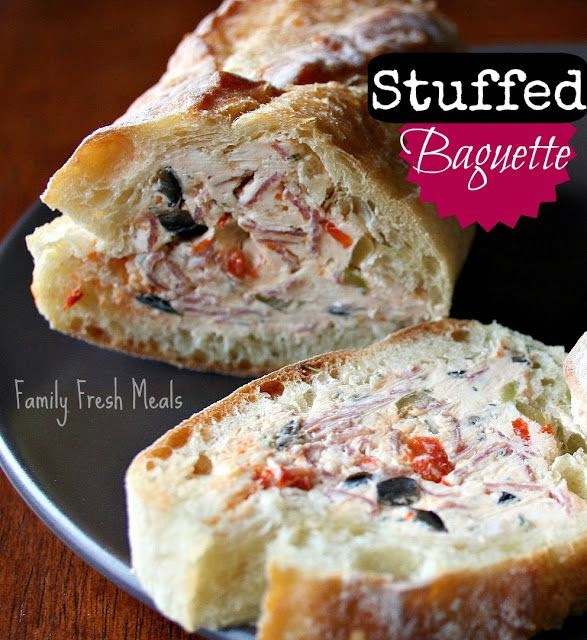 14 Dec 9 Tested Appetizers For Your Party

Posted at 22:54h in Uncategorized by Beth A
0 Likes
I don’t know about you, but my Pinterest boards are overflowing with cool recipe ideas that I seem to never have a chance to try out. So when my husband said he wanted to have around 20 people over to try out his latest home-brew beer, I jumped at the chance to make some recipes that I have pinned!
Here’s my list of the nine recipes that we made for the party. All but two were made a day in advance, and they all turned out wonderfully! They were well tested at our party and I have already had some emails/texts asking for the recipes.
Stuffed Baguette {recipe & photo source}
Who doesn’t love bread, cream cheese, salami, and roasted red peppers? This idea of a stuffed bread was so easy to do. I just diced everything up and shoved it in there! Also, this was an easy one to make the day before the party and put in the refrigerator. On the day of the party, I only had to slice it and put it on a platter.
Pull-Apart Party Loaf {recipe & photo source}
This recipe turned out so cute once baked. I ended up using regular old American cheese (instead of what the recipe called for) and it tasted just like a pull apart “suped-up” grilled cheese sandwich. The kids loved that you could pull off bite sized pieces off the loaf. I made this the day of the party, but after doing so, I really feel it could be made a day in advance.
Antipasto Appetizer 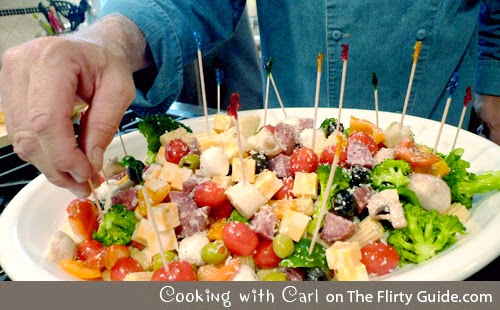 {recipe & photo source}
This recipe hands down was my favorite of the group. It was so simple to put together the day before and feeds a ton of people! Everyone loved to be able to take toothpicks and pick out their favorites among the group. We poured the Italian dressing on all the ingredients (except the peppers and colby jack cheese) the day before. Then we just place the cut up peppers and cubed colby jack on top of the rest in the container and let it all marinate overnight. This one was great to make ahead one day, but honestly it’s been almost a week since we have made this recipe and we are still eating the leftovers.  I think it could be made a little further in advance if needed.
Hawaiian Baked Ham and Swiss Sandwiches 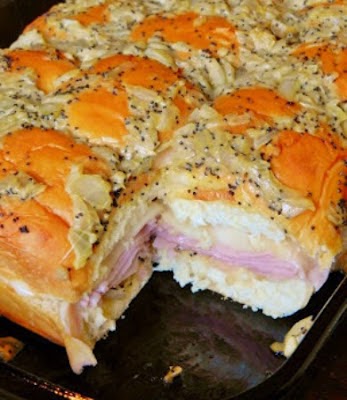 {recipe & photo source}
I ended up doubling this recipe for our party guests and I am glad we did. The sandwiches went like hot cakes! The butter and mustard poured over the top and layered throughout created the perfect hot little sandwich bite. I also layered the sandwiches a day in advance and then baked them on the day of the party. A word of caution though, when it comes to feeding these sandwiches to kids…they are very buttery (and delicious) which means greasy kids hands!
Buffalo Chicken Tortilla Pinwheels 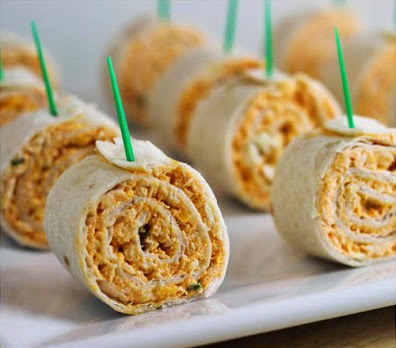 {recipe & photo source}
I have to say out all the recipes I made, these were my least favorite. I have never been a pinwheel fan, so I was not surprised to think these were OK. However, our guests loved them and I think if you enjoy pinwheel rolls, this is a nice spin on the normal ones you might serve. The buffalo sauce and blue cheese added a nice kick to the chicken rolled up inside. They were easy to make a day in advance and slice up on the day to serve to others.
Stuffed Pizza Rolls 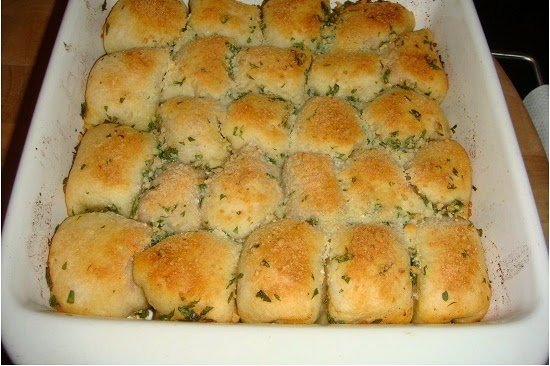 {recipe & photo source}
This recipe and the next were specifically made thinking of the kids at the party. What child does not love Pizza and Hot Dogs! Each little roll is stuffed with a little string cheese and pepperoni, baked with a garlic butter glaze, and dipped in pizza sauce! YUM! The only thing that would make these any better would be if you could make them a day in advance, but I didn’t think the pizza dough would hold up without becoming dried out or soggy. 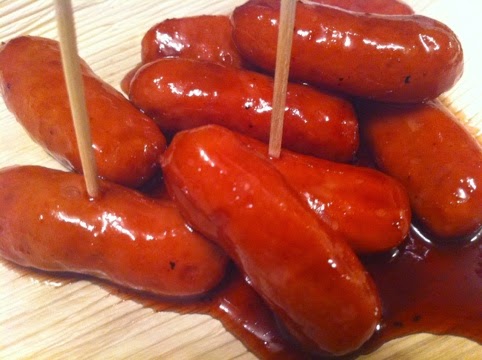 {recipe & photo source}
What’s a party without cocktail wienies. Part of the reason these are so popular is because they are so darn easy to put together. I just threw mine in a crock-pot with one bottle of Sweet Baby Rays and a jar of grape jelly. They were perfect! These were mainly made for the kids (and ease of recipe) and I felt like the grape jelly tamed the spiciness of the barbecue sauce, which my kids LOVED!
Rolo Pretzel Turtles 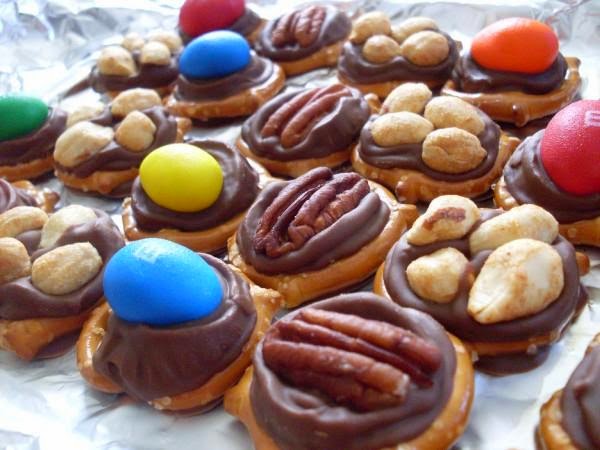 {recipe & photo source}
I think everyone and their Mom has made these cookies at some point. I like them because they are easy, make a lot, and you can customize them! I made half of ours with red & green plain M&Ms (for Christmas) and the other half I topped with pecan halves. Everyone ate them up fast!
Gingerbread Cheesecake Bites 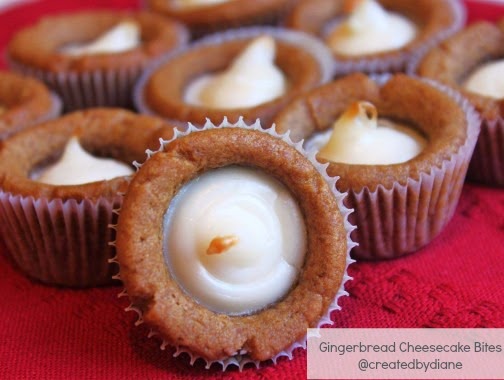 {recipe & photo source}
These cookies are going to be on my make every year Christmas cookie list! In fact, I plan on making them again for a cookie exchange I am doing. They are easy, but look so fancy. I followed this recipe almost all the way except for the cream cheese filling part. It called for 2 cups of powered sugar and 4 ounces of cream cheese. I ended up using 8 ounces of cream cheese and 1 cup of powered sugar. I think 2 cups of powered sugar would have been too sweet. They baked up to look just like the picture above, so cute and fancy! Everyone thought I had spent a lot of time on them, but I hadn’t….hence that is why I will be making them again this week and for years to come!
I hope I gave you some menu ideas for your next party! It was nice that all of the recipes above were a hit and we will definitely be making them again at our future parties!
Happy Cooking!