Making Homemade Pickles in a Crock

Posted at 14:29h in Uncategorized by Beth A
0 Likes

A few weeks ago I scored these awesome old 2 gallon crocks at an auction for $5 each and didn’t have a clue what do to with them. I know people used them to make wine, sauerkraut, and pickles but I wasn’t sure when I would have time to do either. 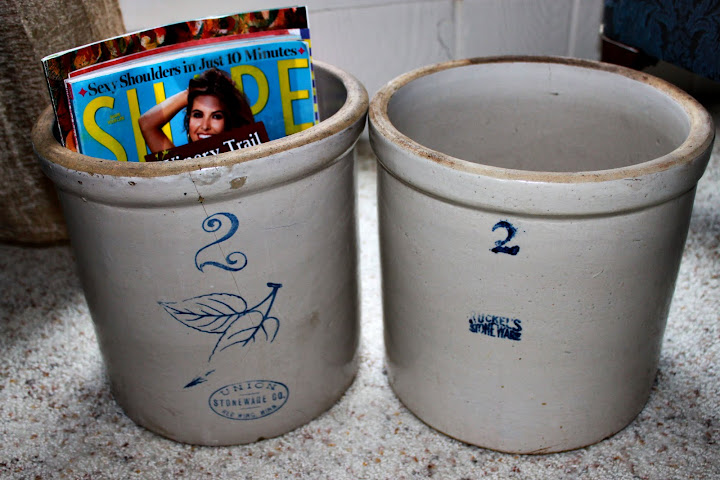 So, last week when my mom dumped an entire bag of cucumbers from her garden on me I thought it would be a perfect way to try it out. As you can tell, the one holding my magazines has a crack in it, so it won’t work for pickles, but the other one is perfect. I looked up directions online and found a very easy tutorial from Picklefreak.com and decided to give it a try.

First, I had to assemble my ingredients: 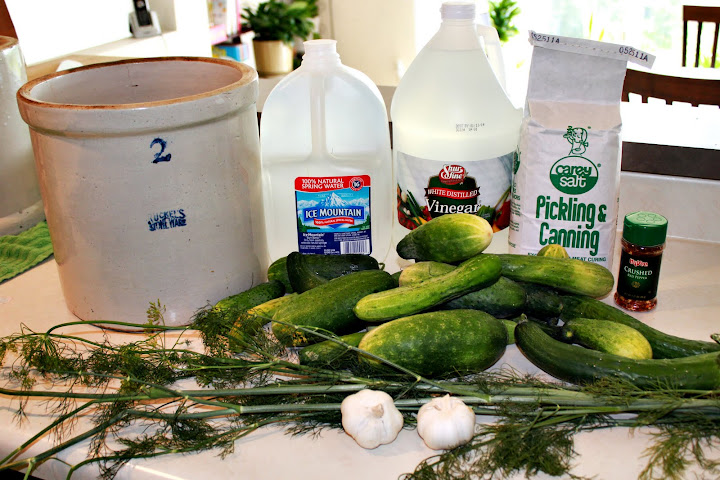 – a bunch of cucumbers

– 2 garlic cloves (really I would just use 1 next time)

– a bunch of dill

Now to start off, wash off your cucumbers and slice them all so they are about the same size. I think if you kept the big ones whole that they would pickle at a different rate so it might not work so well. 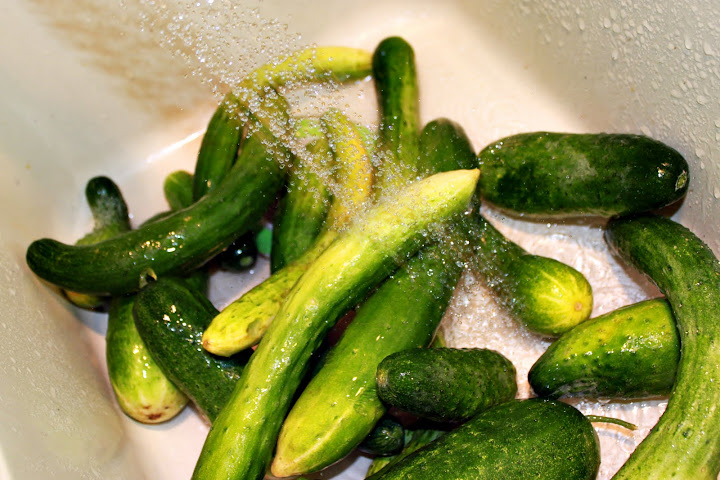 In a very large bowl, mix together vinegar and spring water. 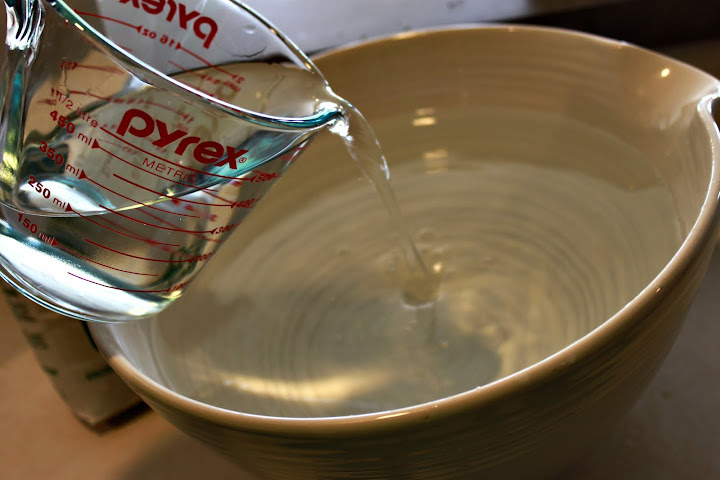 Pour in the pickling salt. 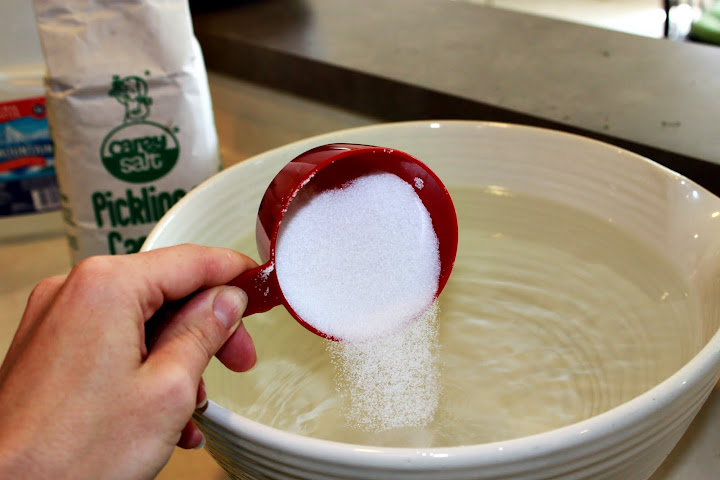 Stir, stir, stir until the salt is well dissolved. 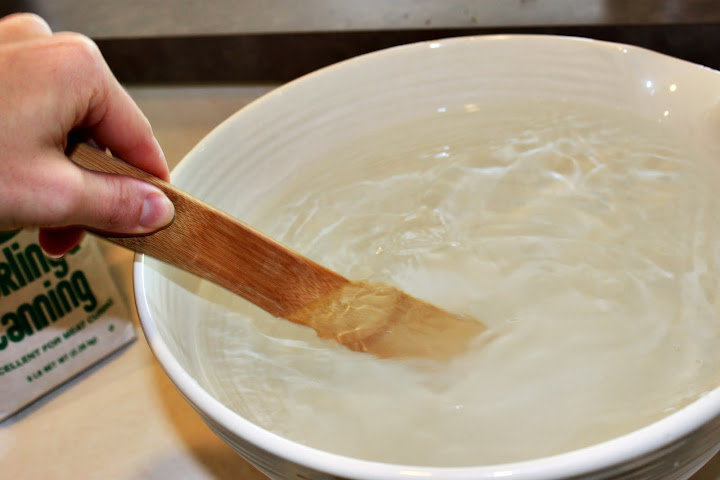 Break off the dill from the stem and peel the garlic. 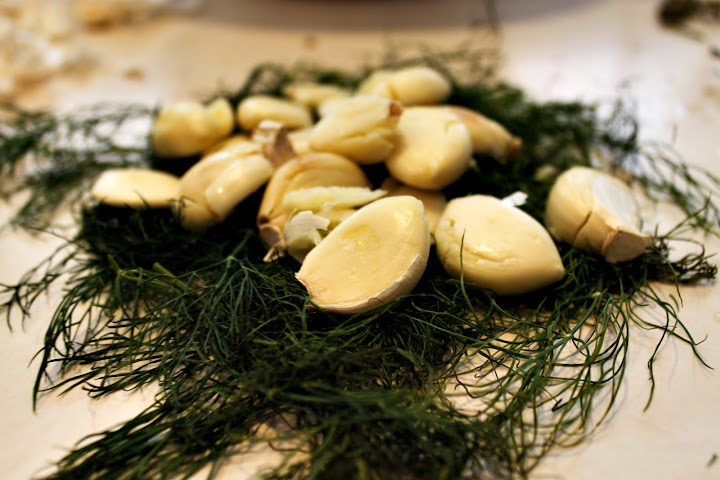 Put half of your cut cucumbers in the bottom of the crock. 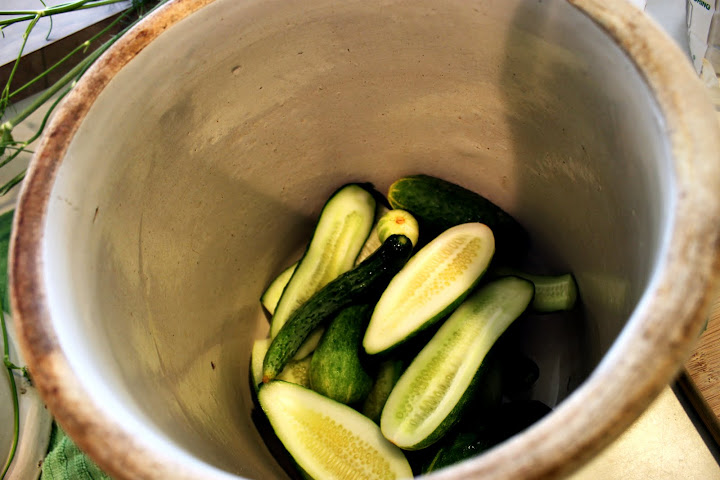 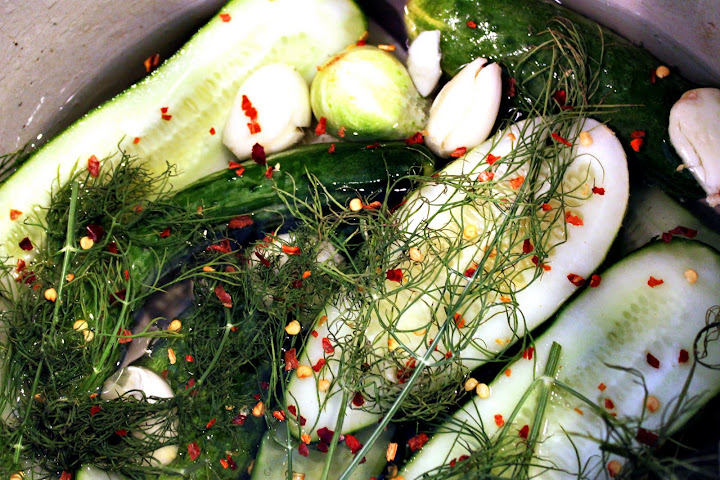 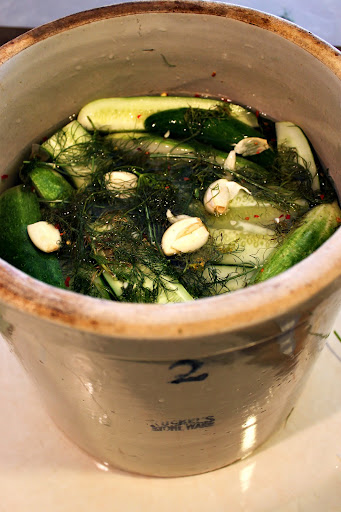 You don’t want the cucumbers to be above water so I suggest putting something on them to hold them down. I used two of my little plates and that worked pretty good. 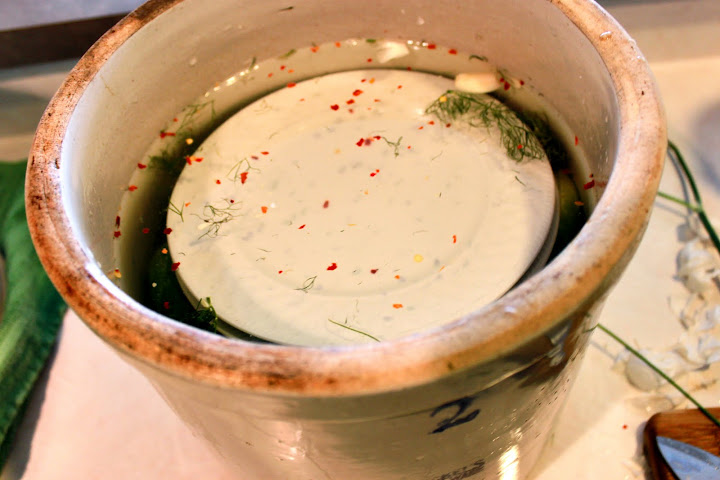 Place the crock in a warm, dry place, and cover wtih a towel. 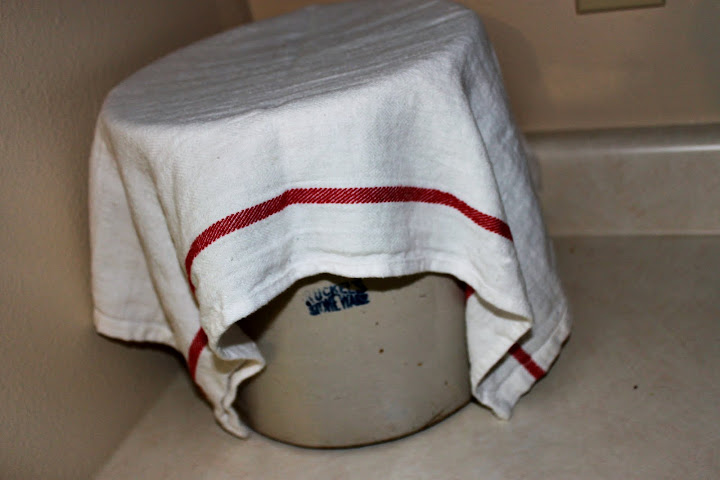 Now at this point, Picklefreak says that after a few days you will get a scum that forms on the top and to scrape it off. I did not have any of this, so I didn’t need to do that. Also they said to leave there for 3 weeks. I also didn’t do that. I left them there for about 5 days and checked them. I was wanting more of a half-dill pickle, inspired by the half dills we had at Katz’s Delicatessen in New York City and they tasted great after 5 days. (Side note: My garlic turned blue! Yes, I know that is strange but I looked it up and it happens when garlic is picked very young. It’s a chemical reaction in the garlic with the vinegar and totally edible.)
Since I liked the pickles, I decided to store them in the fridge and they can be kept there for a few weeks. Since I don’t know how to can yet (an adventure I plan on tackling with my mom next week) I went to World Market and picked up a very large jar with a seal on the top. Not only is it super cute, it looks so cool with all the pickles in it. 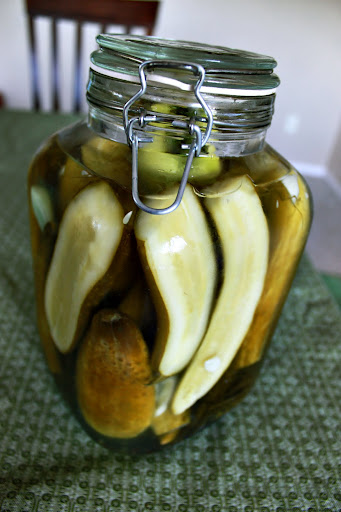 The pickles taste delicious and they are so fresh tasting! They were a little heavy on the garlic, which I love garlic so I am ok with that, but others might think it’s too much so next time I won’t use as much! I keep the pickles in my fridge and eat one almost daily. If I still have a ton in a few weeks, I plan on using them to make Christi’s Pickle Chips recipe!