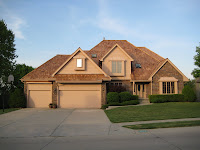 In March of 2009, Ben and I purchased a 1987 short-sale home. We really love this house but the previous owners really weren’t able to keep the house up to date. Saying it needed a “little updating” was really understating the situation. Every room pretty much is covered in wallpaper and all the lighting fixtures appear to be original. We have only been in the house for less than a year, but we have made some major improvements already.

One of the easiest updates so far has been just to redo our foyer. The chandelier was so dated and it was an ugly brown color (the only room without wallpaper).

I came home one weekend and decided to paint it red. As I applied the blueist grey tinted primer, I noticed how the color really brought out the red in the oak around the room. With little deliberation, I made my way back up to Lowe’s and purchased a whole new blue-grey color for the entryway.
I LOVED the end result, except for one thing. Our chandelier was so UGLY! The shaped was dated and it had glass etched with wheat. I was really not that into it. Replacing it was not going to be easy. The chandelier was about 46” tall. We really needed a large chandelier to make the space look the best. I soon found that chandelier of this size are EXPENSIVE! Most of them ranged from $500-1500. My husband was not to happy about that price tag.

One day I was looking around on homedecoratorsoutlet.com and I stumbled across the perfect chandelier. It was 42” tall and 42” wide for a bargain price of $199.00! It was even antique brass, the color of all of our fixtures in the house. I had to have it! One week later my new chandelier arrived and I was so excited! I took it out of the box, played with it, danced with it around the room…you know the usual…then it hit me! How are we going to get this thing up there? Our ceiling is 16’ tall. The current chandelier weighs about 60 pounds. Even if we got up there on a ladder the weight of the old chandelier would for sure bring us crashing to the ground.
For the last 3 months, I have had this chandelier sitting in my front room, just lying in the box. It was beginning to cross my mind that the beautiful chandelier might be making the floor in the front room its permanent home ….until last week.

We have started remodeling our kitchen and my husband wanted to have an electrician come out so he could brainstorm some lighting ideas with a professional. I thought, what a great time to get my chandelier hung by someone who might have a 14’ ladder. I called the company and sure enough they had one. It took two fairly large men to climb up on both sides of that ladder and remove the old fixture. I sat there watching, biting my nails that they would not fall or have the chandelier come crashing to the ground. After 45 minutes of torturing pain, the new pretty chandelier was up and going.

It is so nice to finally enter my house with such a lovely sight as my new chandelier. It just is one more little accomplishment that my husband and I have made that makes this house feel so much more like a home.